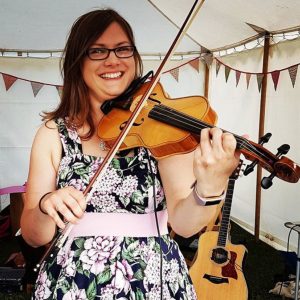 Erin is a fiddle teacher and folk music workshop leader who specialises in folk styles and techniques from England, Ireland and Scotland.

Coming from a background of mixed traditional and contemporary Irish fiddle playing and singing, Erin first performed in the trailblazing young group No I.D in the BBC Radio 2 Young Folk Awards Competition back in 2002. The group went on to make two CDs and played at the Cambridge Folk Festival four times sharing the stage with the likes of Show of Hands, Sharon Shannon and Martin Simpson in the Saturday Big Session on Stage Two.

Over the past 20 years Erin has played with a number of ceilidh and barn dance bands but most recently has been one of the lead musicians with the formidable Stumpy Oak Ceilidh Band, who are one of the busiest and best ceilidh bands in the country.

Based in the historic Cambridgeshire village of Littleport Erin teaches a range of ages, from 5 – 100. Erin also holds an enhanced DBS.

Ever fancied taking up the fiddle? Do you already play but need extra tuition or wish to build confidence with an experienced, patient teacher?

Erin performs in a number of acts for ceilidhs and concerts at private functions and festivals all over the country.

Erin will soon be leading folk music workshops around the East Cambridgeshire and West Suffolk areas.