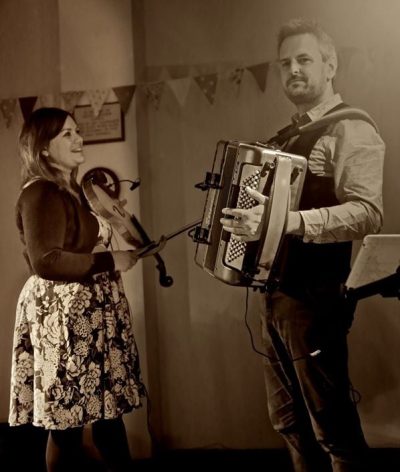 Biography: Erin Brown & Barry Watson offer lively renditions of traditional folk music featuring vocals, fiddle, stomp box and accordion (plus occasional appearances from whistles and bouzouki). Songs and tunes are taken from England, Ireland, Scotland and further afield, but the accompaniment is typically stompy and English, with the odd syncopated Breton rhythm thrown in for good measure. When not playing as a duo, the pair can be found playing private events and main stages of folk festivals across the country with the ever-popular Stumpy Oak ceilidh band as well as running workshops on folk music and dancing. 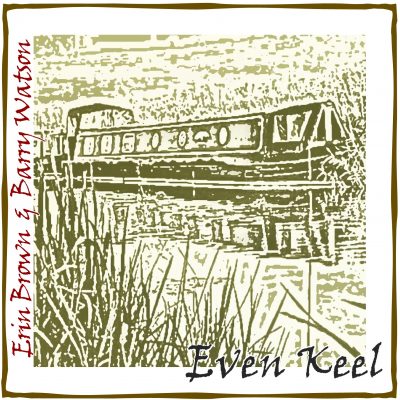 Even Keel is the first of a series of EPs being produced by the duo ahead of folk club and festival events in 2021/2. It is a collection of music recorded during the turbulent summer of 2020 on Erin & Barry’s widebeam narrowboat.

We heard an archive recording of Hopping Down in Kent and fell in love with the words and tune. This was the first song we recorded as a duo and both of us were really pleased with the result as we think it captures our sound completely. The track also features backing vocals from our daughter Lucy from when she was only four years old!

Logy Bay is a traditional song from Canada. We have heard lots of rousing versions of this song which are a bit more Country and Western and in waltz time – we prefer it gentler and in four. This song would definitely be considered the soundtrack to our holiday to Romania before we went into lockdown – we listened to Barry Dransfield singing it on repeat.

Doodle Oak Cloggers/Dolia/Peat-Fire Flame is a set of polkas. The first tune is written by our very talented friend – Jonny Dyer – who named it after his local morris side. The second we got from a Northumbrian Pipe tune book and the last tune Erin heard her dad’s ceilidh band play back in the early 90s – Barry also played it at sessions around his home town of Sudbury. We had always thought this tune was from East Anglia but after a bit of research we found out it’s actually from Scotland – duh!

We discovered Hobbety Bobbety How-Now whilst on holiday in Northumbria. We ventured into the charity shop in the village we were staying at and came across a songbook entitled Besom Maker and Other Country Folk Songs (priced 20p!) We then cobbled together extra verses from the Child Ballads’ multiple versions of this song. We firmly believe that every song should have some reference to cheese that can run away!

The Lowlands of Holland is slightly different to our other recordings, with a more cut-back approach. Not many people know that Barry is a pianist, and it’s been fun dusting off the ivories after some may fallow years. We heard an old BBC radio recording of Sandy Denny singing this version of the melody vowed to do our own version.

Lucy Brown (aged 4) –  singing on Hopping Down in Kent

Recorded and produced by Barry Watson